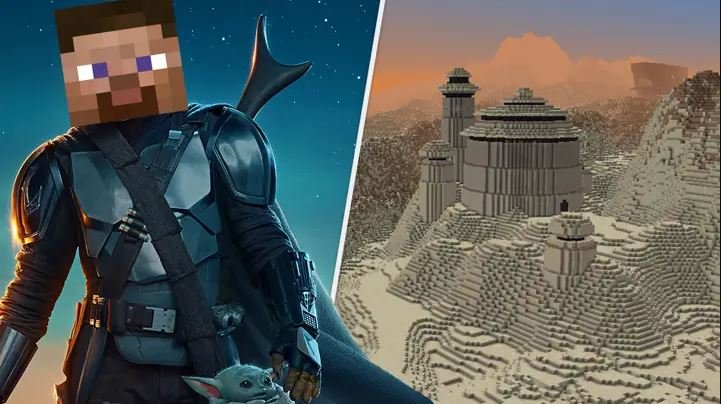 Some would say Minecraft is one of the greatest games ever made and of course with great power comes great responsibility. This player is creating the whole galaxy from Star Wars starting with Tatooine and hopping from planet to planet. I think that’s the greatest use of your free time, ever.

Of course, Minecraft has crossed over with the space opera before, with the DLC that gave players the ability to fly in TIE Fighters and X-wings to 12 planets to the tunes of the licensed soundtrack. This, however, is the work of one mega fan by the name of vistachess who’s been pursuing the project for more than a year now.

Blocks, bricks. They’re sort of synonymous, right? I mean this texture pack that transformed blocks into Lego bricks looks tip top. And every day we are closer and closer to playing Lego Star Wars: The Skywalker Saga. Check out the newest trailer here!

At the moment, it’s Tatooine and Coruscant that have been realised in their entirety in the sandbox simulation game. Using World Paint and World Edit to chip away at their lofty goal, the level of detail in the worlds is absolutely amazing and fellow fans are floored. “I’m struggling building a house meanwhile OP is building a galaxy,” said one.

“The sheer size of this. I wish I was a Star Wars fan because this would be a million times more impressive, but I don’t need to be one because it’s already super impressive!” praised another.

Though we don’t know which planet is coming next, we will watch vistachess’ career with great interest. Yet, if those lush greens and circular layouts are anything to go by, I’ll bet good money that it’s Naboo. Progress has been chronicled on their YouTube channel and you’re actually able to download the maps from their website here.

Recently, the rumoured Knights of the Old Republic remake was officially revealed with a shiny trailer in Sony’s PlayStation 5 showcase. Now, don’t worry – it’s not exclusive to the console, and it’s got a handful of the original team on board for its development.